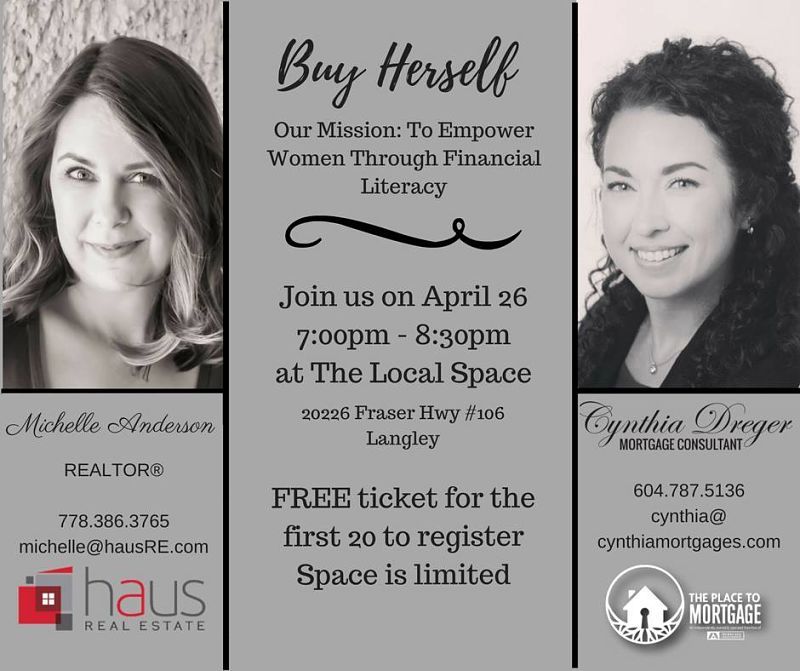 Please join Cynthia Dreger, Mortgage Consultant and Michelle Anderson, REALTOR® from Haus RE at "BUY HERSELF" a Mortgage Information night on April 26 at The Local Space in Langley.
Their Mission: To Empower Women Through Financial Literacy
Did you know 47% of single women, and 35% married women, know very little about finances. 42% do not know their credit score.
According to Statistics Canada women scored 58.6% on 14 questions regarding financial literacy.
Michelle and Cynthia, have teamed up to change these statistics and help increase women’s financial knowledge. We are going to provide information and answer your questions in a relaxed, non-judgmental setting.
Do you want to learn how to establish and maintain good credit? The costs involved in purchasing a home? How to position yourself for an approval on your mortgage application? Whether you are self-employed, a first-time homebuyer, new to Canada, or looking for a rental property, or any property, whatever the case, we can help you figure it out.
Come to our FREE event April 26th!
Space is limited so please RSVP -  https://www.eventbrite.ca/o/cynthia-dreger-amp-michelle-anderson-17108965245
Snacks and beverages will be provided.
Read

Posted on March 8, 2018 by Michelle Anderson

Join me on March 15th at the Royal Bank in Cloverdale 17931 - 56th Ave from 6-8pm and learn all about the new Mortgage Rules and how they apply to you. 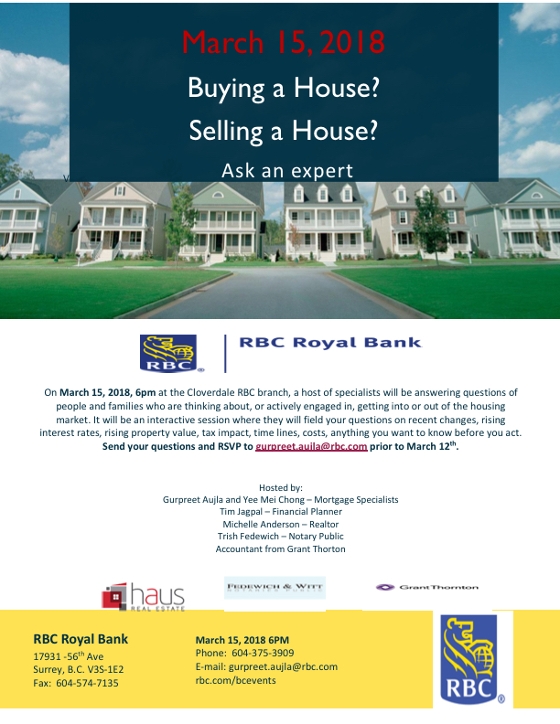 SURREY, BC – Despite slight increases to both active and new inventory in the Valley, overall supply in February remained well below the ten-year average for the month historically.

Of the 1,385 sales processed last month 336 were townhouses and 379 were apartments, together representing 52 per cent of all transactions in February.

"Attached apartment inventory in particular has struggled to keep up with the shift in demand we saw prominently throughout last year," said John Barbisan, Board President. "Without sufficient supply, it has become increasingly challenging for buyers looking to enter the market at that level."

Active inventory for the Fraser Valley finished at 4,340 listings last month, increasing 9.5 per cent month-over-month, and decreasing 6.6 per cent when compared to February 2017. The 10-year average for February active inventory is 7,487 units.

"With the sales-to-actives ratio for townhomes and apartments at 67 per cent and 75 per cent respectively, sellers can expect interest if they price their homes effectively. Talk to your REALTOR® who can evaluate your local market and find the right price point for success.”

For the Fraser Valley region the average number of days to sell an apartment in February was 13, and 16 for townhomes. Single family detached homes remained on the market for an average of 38 days before selling.